From the Golden Ratio to implied lines, Dan Dos Santos shows you his favorite tricks for creating strong compositions.

A strong composition is crucial to a successful piece of art. It’s what attracts a viewer’s eye, and what holds their attention once they take a closer look.

It can mean the difference between an action-packed piece of art and a solemn, contemplative one. But how do you make a composition convey the mood you want, and what is it that makes a composition successful?

There are a many long-standing rules regarding what makes a good composition, such as the Golden Ratio, the Golden Spiral and the Rule of Thirds. But in my opinion they aren’t really rules at all.

Think of them as suggestions or better yet, as optional templates. Traditional methods like these are just one answer to a problem which has an infinite number of solutions. Their purpose is just to offer a simple method for an artist to use to make a more pleasing image.

I’ll discuss some of these techniques, explain why they’re successful and how you can use that knowledge to make a better image.

To begin, all you really need to know is this: a good composition is nothing more than a pleasing arrangement of shapes, colors and tones. That’s simple enough really. Chances are, most of you can make a good composition with your eyes closed.

The root of all composition lies in relationships. Look at the image above. Although it’s technically a composition, it’s not a very successful one. The viewer doesn’t know where to look, nor is there any sense of flow to the image.

By altering one of these squares, even slightly, I’ve created a much more successful composition in the second image. As simple as the image is, it already has a sense of motion, and depth. How? 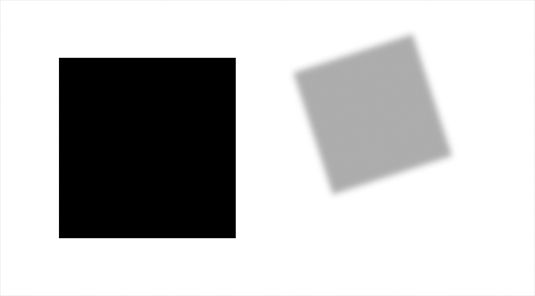 Through relationships. By causing a disparity between the shapes, I’ve given the viewer a means by which they can compare those shapes. “This one is bigger, that one is lighter.” The grey square appears to be moving and receding only when compared to the black square.

The process of comparing these shapes requires that the viewer moves their eyes repeatedly around the canvas, and therein lies the true goal of a great composition: controlling that eye movement.

Let’s look at the Golden Ratio. The idea was started by the ancient Greeks, who were strong believers in the Platonic concept of ideals.

They believed that all things, both tangible and intangible, have a perfect state of being that define them.

They also felt that one should always strive toward achieving this ideal state, be it in mathematics, one’s physique, politics or aesthetics.

Greek mathematicians, after repeatedly seeing similar proportions in nature and geometry, developed a mathematical formula for what they considered an ideal rectangle: a rectangle whose sides are at a 1:1.62 ratio.

They felt that all objects whose proportions exhibited this were more pleasing, whether a building, a face or a work of art. To this day, books and even credit cards still conform to this ideal.